But I Wanted You to Have a Normal Life | My Musings 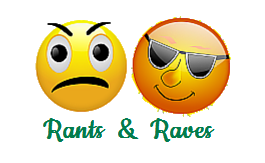 Wherein I present a hated or loved trope and discuss it using examples.

**This discussion contains minor spoilers for the following book: The River's Edge**

Welcome to my first ever "Rants & Raves." This will be an every-other-month subfeature of "My Musings," the weekly discussion post here at Got My Book.

I have decided to start off with my current biggest pet peeve. I hate it when parents or other responsible adults keep important secrets from the main characters that put them in danger of dying, of harming others, or even just of experiencing shocking life changes they are completely unprepared for.

I am not talking about secrets maliciously kept by antagonists here. These are instead the secrets kept by loving parents/guardians, who claim benevolent reasons. Things that the character in question had a right to know and needed to know in order to be prepared.

All of these examples come from books I enjoyed enough to purchase.

"18-year-old Kasia Maier planned to spend her summer studying turtles in the sand prairie, not trudging through fearsome backwaters with her new coworker, Blayne. And when a monster drags Blayne into the Mississippi River, Kasia never expected herself to jump in after him. She saves him, but soon she's discovering the monstrous in other places... including herself.

Now she's wavering on the edge between a dwindling humanity and a dreadful immortality. The river is tempting one moment, terrifying the next. She doesn't understand who she is or where she belongs. Blayne, the one person with the potential to help her, is also the hardest to resist. If she can't stop her own transformation into a river spirit, he will be her first victim. And that's just the beginning - even greater threats are lurking in the shadows."

Kasia's mother taught her two things over and over - 1) Stay away from the water and 2) all men are "scum." Turns out that Kasia is 1/4 Rusalki (Russian siren), and going into the water is changing her into a creature whose kiss can drain the life from men. But her mother never told her that, just insisted that she obey the two rules. She didn't even think men are scum, she just wanted Kasia to stay away from them.

This was a bad plan! First off, Kasia had no idea what would happen to her when she went into the water to save Blayne; and since it appears to be irreversible... Secondly, I think it is a monumentally stupid idea since Kasia may have just decided that, as all men are scum anyway, they deserve to die and she should embrace her murderous new abilities.

"Xandra Illuminata Smith has lived for the last three years with ghosts as parents but her life gets even stranger after her seventeenth birthday when she finds out that her mother is actually a Witch in hiding and her biological father, whom she knew nothing about, is a Fairy and King of the Fae realm.

Xandra is the first Witch Fairy to be born in thousands of years for very good reason. No one should be able to control that much magic and Xandra was never meant to be born at all but her mother has managed to keep her hidden away until now.

The Witches want her dead and the Fairies want her blood, for only her blood will reopen the gateway to the Fae realm and allow them back into this realm to take revenge on humans and Witches alike for having banished them hundreds of years ago.

Xandra has very little time to learn how to use her powerful Witch and Fairy magic that has been bound since her birth while running from the Fairies who managed to jump realms and want to take her blood to set the others free."

You have powerful & dangerous magic, which will be unbounded now that you are 17. But I haven't told you about it, let alone taught you how to use it. Oh, and everybody wants to kill you. How could this possibly go wrong? (To be fair, she taught her some aphorisms that turned about to be useful.)

What makes this even worse is that the reason Xandra was born was because her grandparents hadn't taught her mother what she needed to know to avoid conceiving the child of prophecy. Having made a horrible, potentially destructive, mistake due to ignorance, how could she keep her own daughter even more ignorant?

Teach your kids what they need to know to avoid world destroying mistakes & defend themselves!

By: Maggie Stiefvater / Narrator: Will Patton

"Every year, Blue Sargent stands next to her clairvoyant mother as the soon-to-be dead walk past. Blue never sees them--until this year, when a boy emerges from the dark and speaks to her.

His name is Gansey, a rich student at Aglionby, the local private school. Blue has a policy of staying away from Aglionby boys. Known as Raven Boys, they can only mean trouble.

But Blue is drawn to Gansey, in a way she can't entirely explain. He is on a quest that has encompassed three other Raven Boys: Adam, the scholarship student who resents the privilege around him; Ronan, the fierce soul whose emotions range from anger to despair; and Noah, the taciturn watcher who notices many things but says very little.

For as long as she can remember, Blue has been warned that she will cause her true love to die. She doesn't believe in true love, and never thought this would be a problem. But as her life becomes caught up in the strange and sinister world of the Raven Boys, she's not so sure anymore."

This book is the perfect contrast to River's Edge. Every psychic who has ever read Blue has predicted that she would kill her true love if she kissed him. Although she did keep secrets about Blue's father, her mother made sure that she was aware of the predictions. And she apparently did this without traumatizing Blue too much. I especially like the passage where Blue talks about how her expectations of what it all meant changed as she grew older.

"While most 17-year-old American girls would refuse to let their parents marry them off to a stranger, Robyn Mason dreams of the mysterious McKale in Ireland, wondering how he'll look and imagining his Irish accent. Prearranged bindings are common for magical families like her own. However, when she travels to the whimsical Emerald Isle, she discovers that there's more to her betrothal and McKale's clan than she'd been led to believe. What starts as an obligatory pairing between Robyn and McKale morphs over time into something they both need. But one giant obstacle stands in the way of their budding romance: a seductive and deadly Fae princess accustomed to getting what she wants - and what she wants is McKale as her plaything. Love, desire, and jealousies collide as Robyn's family and McKale's clan must work together to outsmart the powerful Faeries and preserve the only hope left for their ancient bloodlines."

I need to start by saying that her parents did keep some aspects of her situation a secret. And, while I agree with them that the 6 year old Robyn didn't need to know everything, I also agree with her that they should have fessed up sooner.

But they did an awesome job of preparing her to not only understand but also be excited about being the girl chosen to marry McKale and help save his clan. And they did it without depriving her of a normal life.