BFF of the Year in Henchgirl | Review + Author Interview 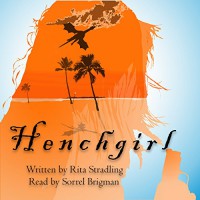 The children of dragons and humans, the dracons, control eighty percent of the world's governments. Humans worldwide are either subservient or prey. On the small vacation island of Mabi, humans call for war. Sixteen year old Dakota Kekoa lives a double life. By day, she pretends to be a human to infiltrate Mabi Academy, a 'humans only' high-school. At night, she works as a henchman for her draconic mafia family, utilizing her ability to steal and manipulate emotions.

This is Book #1 in the Dakota Kekoa series. According to the author Book #2, Rex “will be coming out January 3rd 2017. And, yes there is an audio version planned.”

Again, characters that I like lift this a bit above it’s YA PNR fellows. It should be noted that the majority of the characters in this are among the group that should be considered “the bad guys.” I was willing to overlook it in this one, since I would like to see where this going. I think many of the characters could be “good guys” if things were to change.

It has a love triangle, which I never like. I also had issues with both of the “relationships” that form this love triangle, since neither were open & honest.

There are also secrets kept (unnecessarily in my opinion) that make Dakota’s life much more difficult that should be, which is current one of my biggest pet peeves.

All this doesn't mean I didn't like it. I enjoyed reading it and I am waiting for the sequel to see if romance works out satisfactorily.

Dakota: A fairly typical YA heroine - has to take care of her family, since her parents are rubbish (a Briticism that I love); wants to be more than her gender would normally allow, and thus ignores “girl things” that she probably shouldn’t; has a crush on the popular boy; and is a bit of a speshual snowflake (thankfully not too much). As to her relationships, she is going to need to decide what she wants and make it happen. I don’t like coyness and game playing.

Keanu: He is “off screen” for large portions of the book, but from the beginning seems to be a non-jerk popular boy, as well as brave and protective. As things go along, his actions become more suspect though.

Wyvern: I had some issues with him that had nothing to do with the jerkish way he acted at first. Most specifically, his using her ignorance against her (and thinking he would get a positive response) and the fact that he never listened to her or respected her boundaries unless it suited him. Even if he is just acting according to his nature and station, that doesn’t mean Dakota should have to put up with it. I think there are the seeds of something good there though.

Dakota & Keanu: There are some not so cool things in this relationship (on both sides), but I don’t want to spoil them.

Dakota & Wyvern: Their relationship is currently mostly attraction based on her part. I'm not sure why he likes her (not that she's unlikable, it just isn't made clear), but I do think it is something more than she fears. However, if they can work this out in the future, it might turn into something I could root for.

Others: Mele should win BFF of the year. From their first meeting, to the attack, to the very end, I loved her. / Dakota’s uncle Bobby is great, as are her sisters

The book takes place on a Polynesian style tropical isle (if it correlates to specific real world island, I missed that part). In addition to the the conflict between the dracons, infected, and humans, there is also some prejudice between native and non-native humans.

The "infected" are the supernatural creatures of the world: vampires, werewolves, witches, etc. And they got that way through exposure to dragon blood.   I am hoping that in the next book we get more information on how dragon blood infections work.

It begins with a prologue that sets up how the world got to be this way, which I always appreciate; I hate feeling lost. / It unexpectedly turns into a mystery part way through, and I think I would like to see a mystery series with Dakota. / There is a complete ending to the main story line, but no resolution to the romance or the overall societal problems.

I COULD HAVE DONE WITHOUT: Mele’s smoking habit (which Dakota critiques) / Some swearing / Too much drinking (and not just the alcoholic mother)

: There are indications that Mele had at least one previous intimate encounter. / The full dragons go around impregnating women, even though they know it will probably kill them. / The dracons (part-blood dragons) aren’t much into committed relationships either.

Overall, I didn’t love it. It was bit over enunciated and the voices weren’t great. It was also slightly slow, even on my usual 1.25 speed. However, it was acceptable and wouldn’t keep me from listening again.

(scroll down for more)

Actually, my favorite book format is probably audio book. I started listening to them when my son was young while I was cleaning, cooking and doing other house busy work. I fell in love with Davina Porter’s performance of Outlander, Renée Raudman bringing all of the characters from the Kate Daniels’ world to life, and Neil Gaiman’s voices as he narrated his own novels, The Graveyard Book and Neverwhere. Lately, I buy books on my kindle with whispersync audio books so I can switch back and forth according to my mood.

My biggest pet peeve when listening to an audio book is when the narrator acts out the narrative too much. By this I mean when a narrator wails like a baby when ‘a baby cries,’ or screams when the character does. It wakes me from the plot.

I’d say it’s the same, actually sitting down and writing. Editing and revising can be tedious, but it’s a lot easier to clean or ‘remodel’ a book, than build it from the ground up. Yet, when the words are flowing, I’d say it’s the easiest thing in the world to let them pass through your fingers and onto a computer screen.