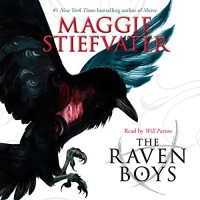 A YA Contemporary Fantasy that plays with typical genre elements and makes it's own unique mix.

Every year, Blue Sargent stands next to her clairvoyant mother as the soon-to-be dead walk past. Blue never sees them--until this year, when a boy emerges from the dark and speaks to her.

His name is Gansey, a rich student at Aglionby, the local private school. Blue has a policy of staying away from Aglionby boys. Known as Raven Boys, they can only mean trouble.

But Blue is drawn to Gansey, in a way she can't entirely explain. He is on a quest that has encompassed three other Raven Boys: Adam, the scholarship student who resents the privilege around him; Ronan, the fierce soul whose emotions range from anger to despair; and Noah, the taciturn watcher who notices many things but says very little.

Source: I received this book free, with no requirements, from the Audiobook Sync program (during a previous year).

This is Book #1 of 4 in the "The Raven Cycle." All four books have been published and are available on audio.

I've owned this book for several years and never got around to listening to it (I wasn't very fond of Shiver). The positive responses to the final book pushed me into finally giving it and chance, and I really liked it. If not for the frequent swearing & the love triangle, this would have been 4.5*.

I am never a fan of love triangles, but this one seemed more than usually unnecessary considering that the situation with the prophecy provides plenty of tension and that friendship is such a strong theme. There were a few cute moments between Blue & Adam and she & Gansey seemed to work well together in their one outing alone together, but I wasn't able to invest strongly in either relationship because of the setup.

I do especially like the way the book takes typical character stereotypes (the psychic's daughter with the special ability, the rich boy, the bad boy, etc) and makes them so much more. As well as the way things swing between normal teenage issues & supernatural weirdness.

Blue: I like they way her differences (from the norm) are handled. She has chosen to own those difference hard, as a way to avoid letting them become something she is taunted about. That has worked, but she is still isolated by the lack of "kindred spirits" in her small home town. She isn't bullied, but she is alone until she meets...

Gansey: Although is isn't above using his wealth & family to get what he wants (or just downright playing on someone else's interests), it appears to be his loyalty & determination which gather people around him. / Adam: The local boy from the trailer park, who works multiple jobs to pay his tuition. He's the one least able to overlook his own origins. / Ronan: Broken & angry, but with intriguing glimpses of something deeper that make you root for Gansey to succeed in saving him from himself. / Noah: Quiet & knowing.

The book takes place in a small town in the Southern United States. The main settings include a trailer park, an abandoned factory owned & occupied by rich private school boys, a house full of psychic women (with a creepy attic), and the woods that surround them and hold many secrets.

There are many types of psychic phenomenon mentioned, including: speaking to spirits, tarot reading, psychometry, ley lines, and dowsing. The central mystery of the series revolves around a Welsh legend of a sleeping King similar to King Arthur.

This is a book that sucked me in from the beginning. The first (spirit) meeting between Blue & Gansey was so simple and yet poignant that I was hooked (another reason I couldn't invest in a relationship with Adam).

The ending resolved the threat & sub-mystery from this book, although leaving the larger quest and threat from the prophecy open. I really liked the final scenes and the way they showed how the group had bonded; it was very emotionally satisfying.

I have already mentioned many of my favorite things/scenes above, and most of the rest are spoilers, so I will just mention 2 simple things here.

I COULD HAVE DONE WITHOUT: Extensive swearing, including approx 10 F words and multiple uses of the Lord's name

: It is reported that a lot of the private school boys get drunk and do stupid things, and that Ronan regularly gets drunk. / Ronan's brother is a playboy who apparently manipulates girls into sleeping with him. / One character's parents weren't married. / There are a couple of intense & violent scenes of family members fighting and of domestic abuse. / There is a short description of a person having been found after slashing their own wrists (prior to the beginning of the book).

Character voices differentiated = Yes, although occasionally I lost track / Opposite sex voices acceptable = only barely, Persephone's voice was the worst / Accents good = Yes, they sounded good to me (I don't know how authentic they were) / Phrasing, Pacing & Pronunciation = Yes / Emoting = Yes / Speed = slow, listened on 1.5 speed, instead of my usual 1.25.

I took a little bit for me to get used to it. After that I liked it as long as the women weren't speaking. When they were, it was only tolerable.