Another Great Installment: The Pirates of Pacta Servanda | Review 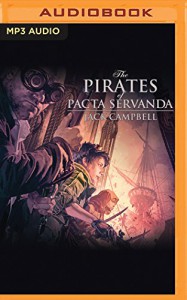 Despite a few small issues, it has joined the previous books in high rotation on my audio player.

Master Mechanic Mari and Mage Alain have survived every attempt to stop them, but their enemies are determined to kill Mari, the only one who can save her world from a storm of destruction. As armies begin to gather and cities seethe with tension, Mari, Alain, and their friends must prepare to confront the storm in the place it first appeared: the broken kingdom of Tiae.

The dangers facing them demand perilous raids, tough battles, and more than a little piracy. Beating the Mechanics Guild and the Mage Guild that have controlled the world of Dematr for centuries will require an unprecedented alliance under Mari's command of rebellious Mechanics, Mages, and common folk who know that together they can change the world, but separately they will all lose.

**This review contains spoilers for the previous books.**

I rated all 3 of the previous books as 5*. I only gave this book 4.5*, since I felt that the beginning was a bit rocky; and there were some other small issues as well. On the other hand, the ongoing presence of some truly great supporting characters (as opposed to meeting them & parting, as in the previous books) gave this book a little something extra. It has been a long time since I liked a "Book #4" as much as I like this one.

Alain: He has grown so much. He still struggles to say "I love you," to grasp the finer details of "social skills," and to apply Mari's new "wisdom" to Mage things. But he has gotten good at being a friend and dealing with people. And he's getting very good at being a partner.

Mari: Although still not comfortable with it, she has accepted and begun to own her role as the prophesied Daughter. I agree with her that much of what she receives credit for is actually the knowledge & skills of others. But she is in no way just a figurehead; she makes decisions and takes action.

Alain & Mari: They are married! I couldn't say that in the last review, since I didn't want to spoil it. I loved their "wedding" and how, in this book, Alain tells Alli he didn't even know it was taking place. Their bond grows deeper as they each are learning what it means to be a spouse but still be an individual as well.

Alli - I stand by my assessment from the last book that Alli is my favorite supporting character / Bev - has proven to be an unexpected highlight as well, and I like the way she has bonded with Alain. While many of the other Mechanics like & respect him because of his connection to Mari, I think only Calu has connected to him so much on a personal level.

This is the book in which Mari truly begins to collect "followers," although I am sure she would hate that term, so we get LOTS of new characters. I think that Mr. Campbell has done a very skillful job of focusing on a few at a time (with major ones being introduced in previous books), so that we can get to know them as individuals and not be overwhelmed.

In the last book, we finally learned the history of this world. This book takes us into the broken Kingdom of Tiae, where we learn how things went so wrong there. We also learn a bit more about spell creatures (such as dragons, rocs, and trolls) and how they work.

As I said in the Summary, the beginning of this book seemed remarkably awkward for such an experienced writer. This includes both the efforts to fill in the back story and also the dialog. Once it gets going though, it smooths out.

I felt like there was a good mix of action scenes and quiet character moments.  And the ending came at a good stopping point.

I COULD HAVE DONE WITHOUT: some swearing

: One of the couples in the book, who just recently met, disappear and are assumed to be engaging in intimate activities.

Character voices differentiated = Yes, although once I think Mr Andrews accidentally mixed up Mage Dav & Mechanic Dav and used the wrong voice. / Opposite sex voices acceptable = Yes / Accents good = Yes, as always / Phrasing, Pacing & Pronunciation = Good, although there were one or two places I felt it was off / Emoting (& non-emoting, for the mages) = Good / Speed = listened on 1.25, my usual

For the most part, the narration continues to be superior; but it was a bit less polished than usual. And there were a few production issues in this book, such as a couple of repeated lines.