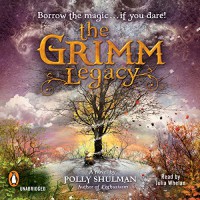 A fun YA Contemporary Fantasy that incorporates Fairy Tales without being a straight forward retelling.

Elizabeth has just started working as a page at the New York Circulating Material Repository - a lending library of objects, contemporary and historical, common and obscure. And secret, too - for in the repository's basement lies the Grimm Collection, a room of magical items straight from the Grimm Brother's fairy tales. But the magic mirrors and seven-league boots and other items are starting to disappear.

This is Book #1 of 3 in the "Grimm Legacy" series. All 3 are available on audio.

I've read a lot of modern fairy tale retellings, this isn't strictly one of those. Although Elizabeth's life has elements of Cinderella (she even ends up with a single shoe on at one point), this isn't a Cinderella story. Instead it is a book that asks, "What if the magical objects from fairy tales were real and you could borrow them?"

Elizabeth is a genuinely kind person who wants to do what's right but isn't always sure what that is.

I am marking this with a Diversity tag, even though Elizabeth is white, since Mark is African American and Anjali's Indian (the South Asian kind).

Note: Audible has this categorized as a middle grade, which is incorrect; it is YA.

Elizabeth: Her mother is dead and she is caught in a classic Cinderella situation with a neglectful father, less than loving step-mother, and 2 nasty step-sisters. She is also unpopular at school since she stood up for a girl who was being picked on. Fairy tales are important to her because they were something she shared with her mother. She has a bit of a crush on Mark.

The other 3 pages (i.e library interns) are Mark, a high school basketball champion struggling to juggle his own life & heavy family responsibilities; Anjali, who is hiding her relationship with Mark since she is sure her traditional parents would object to her dating a non-Indian; and Aaron, who has a crush on Anjali.

The book takes place in our world, except that fictional items can be real.  The Grimm Legacy isn't the only "special collection" at the Repository. The Wells Bequest of Science Fiction items (which is the focus of the next book) is briefly introduced, as are a couple of others.

I was disturbed by the fact that they are still allowing people to promise things like their first born child. I know that this is fairy tales in modern time, but surely that's going too far.

Starts with the classic fairy tale episode of encountering a strange and needy old woman in the woods, but transposed to NYC.

Although there are more books in this series, there is no cliffhanger despite a few unresolved issues.

I COULD HAVE DONE WITHOUT: The too typical situation where the main characters throw themselves into danger without any consideration, allow themselves to be manipulated by an obviously evil person, and refuse to consult the wise adults in their lives.

I would love to try out the magical objects in the Grimm Collection with Elizabeth, especially the winged sandals and the cloak of invisibility—assuming we could find it.

I have a sentimental affection for paper, but I love being able to carry an entire library on my tablet, and I love the way audiobooks let me read while I’m doing dishes, darning socks, or ranging Manhattan Island from end to end.

I hate it when my phone turns itself on in my pocket or purse, mutters whole chapters to itself, and loses my place.

I always wanted to write books, and I had several first chapters tucked away in my files. When a great freelance job I was doing came to an end, I decided to see if I could actually finish one of those books before making myself look for a new office job. The fear of having to work full-time in an office again was enough to motivate me to finish my first novel.