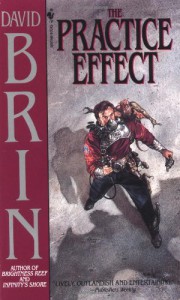 Physicist Dennis Nuel was the first human to probe the strange realms called anomaly worlds - alternate universes where the laws of science were unpredictably changed. But the world Dennis discovered seemed almost like our own - with one perplexing difference. To his astonishment, he was hailed as a wizard and found himself fighting beside a beautiful woman with strange powers against a mysterious warlord as he struggles to solve the riddle of this baffling world.

SERIES INFO: This book is standalone and not part of any series.

I own an old paperback copy of this book. It was something that I kept hoping would be made into audio. And yet I was also afraid that it would be, but would be done badly. The tone of the protagonist's "voice" is so central, that even just a passably decent narrator could have ruined what I love about it. Thankfully that isn't the case.

I am not a fan of prankster characters nor of cruel sarcasm & snark, but I do love a character who makes snarky observations about the world. Dennis is a perfect example of this.

When I read this book for the first time, I though I might end up being a bit disappointed and maybe even offended as a female reader. The only woman mentioned at Sahara Tech is pushy and obnoxious, and then part way through we are introduced to a "beautiful princess" from a mystic tribe. It seemed to be setting us up for a male fantasy romance (gorgeous, blond & ethereal, adoring female). Thankfully it turned out to be a bit deeper than that.

Along with the tone, another thing I love is how the author explored the cultural & sociological ramifications of differences in physical laws. The world felt complete and complex.

I didn't give it a full 5 stars, because I often skip most of the stuff that doesn't focus on our central characters when I'm re-reading/listening.

Note: Neither the cover nor the publisher's description are very compelling. I would like to see both get an upgrade.

Our Hero (Dennis Nuel):  A reality physicist with a sharp wit.

Dennis’s face sometimes took on that dreamy expression often associated either with genius or an inspired aptitude for practical jokes. In reality he was just a little too lazy to qualify for the former, and just a bit too goodhearted for the latter.

The Princess (Linnora): Not just here to adore the hero. Her opinion about him see saws quite a bit, and she is clearly able to think for herself. She is weak enough to faint when confronted by something overwhelming, and strong enough to walk for a full day on blistered feet and a twisted ankle; foolish enough to go off without a guard, and wise enough to realize her beliefs might need re-examining.

Dennis & Linnora: This is NOT a romance, but does include one. There is no InstaLove, but neither is there a lot of time spent on developing the relationship.

The actual nature of the world Dennis enters is one of the central mysteries he is trying to unravel, so I can't say much without giving something away. I will say that I especially enjoyed the description of the city that included not just what it looked like, but how it sounded and smelled as well.

A favorite bit of Earth tech is the exploratory robot.

The author could have chosen to begin with Dennis stepping into the new world and told how he got there in flashbacks, but instead he chose to begin by establishing Dennis' character and background which are central to the story being told.

"The lecture was really boring.

At the front of the dimly lit conference room, the portly, gray-haired director of the Sahara Institute of Technology paced back and forth - staring at the ceiling with his hands clasped behind his back - while he pontificated ponderously on a subject he clearly barely understood."

The book has a clear yet open ending. I would love to read a sequel to see what becomes of Dennis & Linnora, how do the artifacts introduced from earth impact this world & vice versa, do certain people ever get what's coming to them?

What if the “rabbits” here were philosophers? Could he be so sure anything he aimed at wasn’t intelligent?

He acted confident, but he was less than entirely certain. In a science-fiction story he had read as a boy, another Earthling had, just like himself, been transported to another world where the physical laws were also different. In the story, magic had worked, but the hero’s gunpowder and matches had all failed!

I COULD HAVE DONE WITHOUT: Mild swearing
OTHER CAUTIONS

: A song with innuendo / A scene in which our villain is not taking no for an answer, and our hero believes that interfering will only get him killed.

I don't feel that the narration perfectly captures Dennis, but Mr. Caploe clearly understands and does a really good job / He uses different voices & accents to distinguish the various characters / Was more than a bit slow. I listen on 1.5 speed (instead of my usual 1.25)

Tell us something about your lead character(s) that we don't already know.

She is royalty and a wizard, and yet she wants to leave her world.

I dabbled in painting, drawing, music... and of course science. But words were always the food. The air, the drug.

My fifth grade teacher... though I never got very far with that one. In my college freshman year, I tried again, partly in order to distract from the pressures of scientific courses at Caltech. Finally, after college, I found the will to treat writing as a craft, both an art and a profession.

Getting started on a book. I don't know the characters well. I have no sense of momentum. The easiest part? Finishing! By the last third of a story or novel, I am on fire. My characters are fully formed and collaborating with me in the telling, like a well-drilled team of actors. In my works, the last chapters are always the best.

Can a book be both serious and fun?

I am accused of mixing rapid fire fun with challenging ideas in three of my novels, Startide Rising, Kiln People and of course The Practice Effect, where (I admit) fun mostly dominates. I try for that mix in all of my books, of course. But I'm told that in those three books, especially, it all snapped into place with those two desired qualities, all the way through. I hope you feel the same way.

For more info: check out worlds of DAVID BRIN