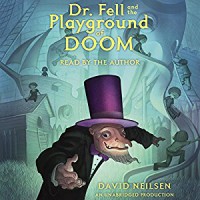 When the mysterious Dr. Fell moves into the abandoned house that had once been the neighborhood kids' hangout, he immediately builds a playground to win them over. But as the ever-changing play space becomes bigger and more elaborate, the children and their parents fall deeper under the doctor's spell.

Only Jerry, Nancy, and Gail are immune to the lure of his extravagant wonderland. And they alone notice that when the injuries begin to pile up on the jungle gym, somehow Dr. Fell is able to heal each one with miraculous speed. Now the three children must find a way to uncover the doctor's secret power without being captivated by his trickery.

Source: I received this book for free from the author. My opinions are my own.

Dr. Fell and the Playground of Doom by David Neilsen, read by the author, published by Listening Library (2016) / Length: 5hrs 23min

I think the scariest part of this book is how alone these children are in their efforts to figure out what is happening. It is a common theme in MG & YA books that the adults are somehow not there (or the kid's fail to consult them). In this book they are there, but (for reasons I won't reveal) are of no help whatsoever. That seems worse to me somehow.

The main characters are Nancy, her best friend Gwen & Gwen's younger brother Jerry. Nancy lives with her divorced mother (with whom she has a strained relationship), and she has a habit of calling Jerry names & treating him less than kindly. Gwen is nice, but not as strong or forceful. And Jerry is a thinker. The three have to learn to work together.

The antagonist, Dr. Fell, is beyond creepy.

For the most part, the book takes place in a typical suburban neighborhood. However scary, most likely magical things appear to be taking place.

Just like the Playground from the title, the mystery at the center of the book starts small and continues to grow. There are some great action scenes at the end (which may be a bit much for young children and those with intense arachnophobia). The book has a satisfactory ending with some good character growth, but there remains the possibility of a sequel.

My experiences with author narrated audiobooks have been mixed. Thankfully Mr. Neilsen has a very nice voice that I quite enjoyed. Those who prefer to have character voices which match the age & gender of the characters need to know that his voice is quite deep, and therefore never sounds young or feminine. He did a good job of portraying character & emotion though.

NOTE: I am currently on a semi-hiatus due to very limited internet access. Comments are appreciated, but may not be responded to; I am sorry.