Will We Ever Be Better?: Little Fuzzy | Review 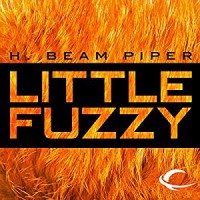 A classic Adult SF that stands up better than some but still has issues.

The chartered Zarathustra Company had it all their way. Their charter was for a Class III uninhabited planet, which Zarathustra was, and it meant they owned the planet lock stock and barrel. They exploited it, developed it and reaped the huge profits from it without interference from the Colonial Government. Then Jack Holloway, a sunstone prospector, appeared on the scene with his family of Fuzzies and the passionate conviction that they were not cute animals but little people.

This is Book #1 of the "Fuzzy Sapiens," series and the only one available on audio. Note: two of the sequels were written by Piper, with some additional ones that were written by other people. There is also a "reboot" of this novel written by John Scalzi.

I have been rereading a lot of classic SF now that I have a blog, and some of them have really made me cringe. This one isn't quite as bad. My biggest problem with it lies in the, I really hope we eventually outgrow such behavior, colonial attitudes. It is made clear from the beginning that proving that the Fuzzies are sentient won't mean that their planet will be given back, just that it will be governed differently.

Jack: He's an old codger you definitely shouldn't mess with, but he's actually quite amiable (rather than cranky). There are tons of interesting tidbits thrown out about him, but never explained. When did he set off a thermonuke? Who did he leave behind? How did he end up on Zarathustra, and does he have any plans for the wealth he may find prospecting.

As is typical for almost all classic SF written by men, the ratio of men to women is way above 50%. The only main female character, Ruth, is at least intelligent & educated and contributes significantly to the outcome.

Also, most of the characters appear to pretty un-diverse. There is one man named Akmed. He is described as being the local police leader's "driver," but I think he is simply the officer who "rides" with the chief & does the driving rather than a menial. He also seems intelligent and is sympathetic to the Fuzzies.

This planet has a wealth of strange flora & fauna. And I love the way they name things (if a planet is known to be inhabited, they ask a native and write down whatever they say, regardless of whether it is an answer or not).

There isn't a lot of truly advanced technology, other than space travel, from our current prospective. The most out-dated technology is the lack of digital media & data transmission. They still use tape & film.

The book starts with a chapter or two of Jack just going about his daily routine, before introducing the first Fuzzy. I think this is important as a contrast to how isolated his life was before they showed up.

There is a lot of exposition & discussion of the concept of sapience that may become boring to those who prefer action stories.

Although there have been sequels written (both by Piper & others), this book really can stand on it's own. It ends with the ruling and subsequent consequences & plans.

"Take a drink because you pity yourself, and then the drink pities you and has a drink, and then two good drinks get together and that calls for drinks all around."

: There is a lot of smoking & drinking going on. / This is the wild west of the galaxy, i.e. when Jack shot people who tried to rob him, it was listed as suicide / There is a brutal (though not gory) murder.

Character voices differentiated = Yes / Opposite sex voices acceptable = Yes / Accents = There are some, but who can judge them in the far future. They didn't bother me. / Phrasing, Pacing & Pronunciation = Fine / Emoting = Good / Speed = listened on 1.25, my usual, and it was a touch fast. / I heard 1 or 2 small errors.

He has a very deep voice, that I didn't love. Mostly I think this is a case where I'm neutral on the narrator. He didn't distract from my enjoyment, but didn't increase it either.