What is Real?: Only You Can Save Mankind | Review 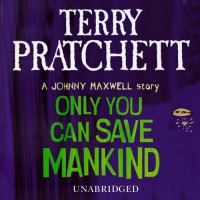 A fun little MG Paranormal SF that may require some explanation of history.

As the mighty alien fleet from the very latest computer game thunders across the computer screen, Johnny prepares to blow them into the usual million pieces. And they send him a message: We surrender. They're not supposed to do that! They're supposed to die. And computer joysticks don't have 'Don't Fire' buttons. But it's only a game... isn't it. Isn't it?

Only You Can Save Mankind by Terry Pratchett, read by Richard Mitchley, published by Random House Audio (2011) / Length: 4 hrs 11 min (this is the Unabridged version)

This is Book #1 of the "Johnny Maxwell" trilogy. All of them are available on audio.

Like most Pratchett book, this one is a pleasure to read for people who love interesting characters.

Note: It takes place during the first Gulf War; so you might need to explain who "Stormin' Norman" is, and other such things, to children who are going to read it. It isn't absolutely necessary though. The book has some interesting commentary on how the war is just another "show" to kids who have grown up with lots of different screens in their lives, and yet they can't help but be affected by it.

Johnny: On the surface, he's an absolutely normal tween kid in a home that is breaking up. And yet this is just the first of the weird things that end up happening to him. He isn't sure if he's crazy or this is real, or even what "real" is. I think his character can be summed up by the fact that he's the only one who listened and was willing to answer.

Kirsty: She's used to being the best at everything she does. But she also expects things to be the way they "should" be. Her character can be summed up by saying that Sigourney Weaver is her hero.

There is a fun cast of quirky supporting characters that includes Johnny's 3 best friends (this is definitely the "left-overs" clique) and the Scree Wee captain.

This is Gulf War era small-town England. And it is video game space ship interiors. One of the best bits of worldbuilding is the way Johnny's fighter comes with all sorts of smells, sounds, and tastes he didn't expect when he is "in" the game. Real life (even a virtual version) just has so many additional dimensions.

It starts with Johnny having died 6 times already (and it isn't even 5 o'clock). I was pulled right in by him, his likeable ordinariness, and the baffling situation he now finds himself in.

Although there are 3 books in this series, they are each completely separate adventures. The ending wraps up everything with a typically quirky (and entirely satisfactory) detail.

I COULD HAVE DONE WITHOUT: The game pirating (enabled by a father who copies the instruction manual at work) / Parents who try to be "friends," but don't make sure that their children have clean clothes and something to eat. / A couple of small vulgarities

: Johnny & his friends sometimes do each others homework. / Big Mac is a self-proclaimed skin-head, but one of his best friends is black (sorry, I don't know the British equivalent of African American), and he spends a night in their home with no problems. I think it is all part of his effort to look tough to the people in his bad area of town.

Only You Can Save Mankind (Johnny Maxwell #1) by Terry Pratchett, read by Richard Mitchley, published by Random House Audio (2011) / Length: 4 hrs 11 min (this is the Unabridged version) Buy Now | +Goodreads