I Couldn't Forget it: The City of Ember | Review 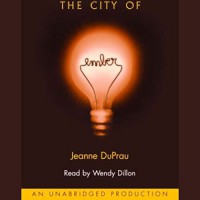 A Post-Apocalyptic MG book that refused to disappear into the back of my brain.

Many hundreds of years ago, the city of Ember was created by the Builders to contain everything needed for human survival. It worked…but now the storerooms are almost out of food, crops are blighted, corruption is spreading through the city and worst of all—the lights are failing. Soon Ember could be engulfed by darkness…

But when two children, Lina and Doon, discover fragments of an ancient parchment, they begin to wonder if there could be a way out of Ember. Can they decipher the words from long ago and find a new future for everyone? Will the people of Ember listen to them?

This is Book #1 in the completed "Book of Ember" trilogy, all of which are available on audio.

The first time I listened to this book, I enjoyed it but wasn't really that impressed. I did not add it to the list of books I was considering buying. However, after the second time I re-borrowed it from the library and listened again, I realized that there was just something about the characters and their story that appealed to me. The next time a deal was available, I snapped it up.

Lina: She is bright and active. She tries to get adult help when she believes she has found a way out of their predicament. And she doesn't give up the first time it doesn't work. I also like how she takes care of her grandmother & little sister.

Doon: He is moody and active. He doesn't understand why more people aren't trying to fix their problems. However, he has a deep need to be special & to receive recognition. This causes him to avoid opportunities to share what they've found.

I like that they used to be friends but, after a childhood incident, had drifted apart. So there is a sense of something new here, despite the very narrow nature of their world.

Ms DuPrau did a good job of painting a picture of a dreary run down city and it's hand-me down wearing citizens. And I was very struck by the fact that outside the city, there is only darkness.

And we got a clear picture as we went along of how their society worked as well. It is sad that such young children are sent out into the work place, but I guess there isn't any need for additional education in their situation.

The Prologue seemed a bit awkward at first, with two people sort of telling each other things they probably already should have known. I really liked the stuff about the mayors and what happened to the box though.

Note: You really have to suspend disbelief that all the canned good and other supplies would last more than 200 years. (Maybe the "storage rooms" were vacumn sealed.)

The ending is somewhat of a cliffhanger, since the fate of the citizens of Ember is not resolved.

: There is a character with a disability who is also described as very unattractive and who is up to no good.

Character voices differentiated = Yes, I wasn't fond of several of them though / Opposite sex voices acceptable = Yes, I actually liked some of them better than some of the females / Phrasing, Pacing & Pronunciation = / Emoting = / Speed = listened on 1.25, my usual

Ms Dillon did a superb job of reading "The Instructions," despite what happened to them.

I'm not really a fan of music in audiobooks, and this wasn't an exception. And the sounds effects were occasionally too loud. (The noises were supposed to be loud, but I want to hear the narrator.)