It Really Hits the Fan: The Assassins of Altis | Review 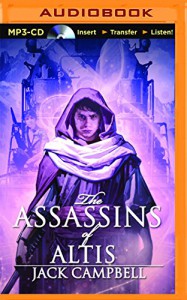 This YA series is still going strong and still a favorite.

Trapped within the dead city of Marandur, Master Mechanic Mari and Mage Alain must escape both merciless barbarians and the pitiless Imperial Legion. Beyond those dangers lie the mightiest and most unforgiving powers in the world of Dematr: the Great Guilds that rule the world with iron fists.

Mari's Mechanics Guild and Alain's Mage Guild have always been enemies, but they are united in wanting to kill their rogue members before Mari can fulfill the ancient prophecy of being the one who will finally overthrow their power. Mari and Alain must risk those dangers because halfway across their world lies a place where truth has long been hidden. A place that could explain why their world's history begins abruptly, with no hints of what came before. A place where they might learn how the Mechanics Guild came to control all technology and how the Mages manage to alter reality temporarily. A place that might tell them how to achieve a task that appears to be impossible.

Never before have a Mage and a Mechanic worked together, and their combined talents offer their only hope. But she and Alain must first survive the deadly and implacable Assassins of Altis.

Yes, that's right, this chronic series dropper has now given 5* ratings to all three of the first books in this series.

Mari: In Book #2, she finally learned that she is "The Daughter" prophesied to fight the oncoming storm of civil war & social collapse. She still finds it difficult to accept the fact, but has accepted that something must be done. She also continues to struggle with jealousy and emotional outbursts, but never fails to call herself out on such behavior

Alain: He is getting better at fitting in and appearing normal. I love watching him learn how to do the simple things in life (such as purchasing train tickets):

"The Mage, who could walk through walls, foresee the future, and create heat out of nothing, had come back visibly proud at having successfully handled something that complicated."

But what I loved best about him in this book were the ways in which he acted as a true friend and partner to Mari, the ways he supported her and also pushed her to face things she didn't want to.

"I would... What were the words you used? I would give you my promise now if you would like that."

But Mari battles her abandonment issues and her fears that she could turn out like her own parents. However there are important developments in their relationship in this book.

One of the themes is that together they can do things neither would be able to do alone.  That makes for nice opportunities for each to fail at things, and not be that character who succeeds at everything.

I love Mari's best friend, Mechanic Alli, who we finally get to meet after just hearing about her in the past two books. She's the one who built the rocket launcher Mari used to kill the dragon in the last book. (Mr. Campbell, if you are reading this, I would be all over a spin-off series that follows the adventures of Alli & Calu.)

About half of the book is spent in the Roman like "Empire" they entered in the previous book. The 2nd half takes us to some island nations. There aren't a lot of new things presented in this world, but we do find out some very important historical information.

The book starts with Mari & Alain bidding goodbye to the "Masters of Marandur" and beginning their attempt to escape from the sealed city. We get a good introduction to what happened in the last book as they now take the reverse journey.

The series continues to be an extended road trip across the world, but this time they take to the water as well. Although not before having another crazy train ride (poor Alain).

Most of the whole last 1+ hour is an extended action scene, which normally I wouldn't like. However it is combined with a lot of character introductions & interactions as Mari's core team begins to form and I really liked it.  The book has a very solid ending. I would say that it is also the end of part 1 of the series (where Mari is learning who she is and what needs to be done) and the next book starts part 2 (where they begin to do it).

: They stay at a hostel that some people use for illicit purposes.