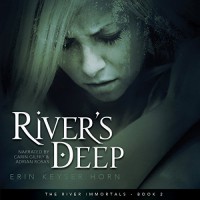 YA Contemporary Christian Fantasy sequel that ups both the stakes and the religious content.

My name is Kasia Maier. Most girls my age are preparing for college, learning at summer jobs, and trying not to mess up dates. Not me. I'm preparing for life underwater, learning that my voice hypnotizes people, and trying not to kill guys with a kiss. I'm still human… for now. Several things could change that in the next few days. My life isn't a Slavic fairy tale - it's a horror story in the river's deep. I have no idea how I will escape alive.

Disclosure: Hovering over the cover and purchasing may give me a small commission (yippee, book $).
SERIES INFO: This is Book #2 of 2 in “The River Immortals” duology. Both books are available on audio. Check out my review of Book #1 River’s Edge.

**This review contains spoilers for Book #1.**

Kasia is now the unwilling leader of the Rusalki (the Russian version of sirens), and afraid to leave them to their own devices lest they kill every man who crosses their path. She’s also possessed by a malicious river spirit who wants to consume Blayne, so she’s terrified to be near him.

Blayne won’t stop until he finds a solution; he is determined! His family continued to be an important support system, despite the briefness of their appearances.

Kasia & Blake didn’t get to spend a lot of time together in this one, but their growing feelings for each other remained a primary motivation for their actions. It did occasionally seem a bit “cheesy,” but I liked it. Their brief interludes together were more sensual than in the previous book, although I didn’t personally feel that it was too much. Unlike many books I’ve read, this couple really is perfect for each other. They have separately selected the same career & university, and are both willing to die for each other. Plus they are fun in the non-life threatening moments too, I can really see this couple making it.

I still love Kassia & Jen’s relationship as well. In fact, I love that there is more of Jen and Scott both, plus more of Jen & Scott, in this one (yes that does makes sense).

The river and it’s environs continued to be a strong presence.

The plot pacing was good, with a mix of action & character scenes. I did feel that the climactic fight scene came a bit early (~2hrs remaining).

NARRATION: Unlike the previous book, this one goes with dual narration. / I really like Carin Gilfry’s voice, it’s very smooth. / Adrian Rosas’ female voices are not great, but not annoying; his pacing & phrasing are sometimes odd. / The singing is beautiful (I usually prefer them to just read the lyrics but this is done “well”) / It was a bit slow, I occasionally listened on 1.5 speed (instead on my usual 1.25)

FAVORITE PART(S): when she recounts her bucket list & when it comes up again at the end (this reminded me of a montage scene in A Walk to Remember) / When nothing is trying to eat or kill them, they take their time to get to know each other and build a solid foundation. They “wait.”

I COULD HAVE DONE WITHOUT: The fight scenes got a bit “gross.” / Mild swearing
OTHER WARNINGS: This book is much more heavily “Christian” than the previous one.

MY RATINGS:
--Narration: AVERAGE to HIGH
--Enjoyment: AVERAGE
--Re-readability: AVERAGE
I received this book free in return for an honest review.