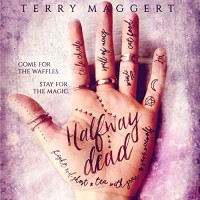 Carlie McEwan loves many things. She loves being a witch. She loves her town of Halfway, NY - a tourist destination nestled on the shores of an Adirondack lake. Carlie spends her days cooking at the finest - and only - real diner in town, and her life is a balance between magic and the mundane, just as she likes it. When a blond stranger sits at the diner counter and calls her by name, that balance is gone.

SERIES INFO: This is Book #1 of the “Halfway Witchy Series.” Book #2 is scheduled to be released on Feb 9th. According to the author, “Erin is working on the preparations for Halfway Bitten, but it will be one month later for the audiobook, which is fine because when she records, she gets it just right.” He also said, “The Halfway Series will have a minimum of seven books, with likely prequels and side trips as well. We're going to meet some new villains, heroes, and get backstory on people who turned out to be far more interesting than I anticipated when I first began to shape their stories. Also, I need a herd of giraffes, and those aren't cheap. Maybe eight books, depending on the price of giraffes.”

Carlie is a witch and a cook, both are of equal importance to her. She is very strong but still learning (from her wonderful Gran). She is also a bit reckless and a lot compassionate.

Jim is a man of mystery. What little is revealed about him (in word and action) is intriguing. I hope to see more of him in the next book.

Wulfric was hard to get a handle on. We learned his story, but didn’t get a chance to really know him. We definitely need to learn more about him.

Note: I hope it isn’t a spoiler to say that this is NOT a love triangle, thank goodness.

I found the relationship in the story to be very unsatisfactory. There wasn’t really a relationship, just physical attraction and a shared adventure.  That would have been ok, it they hadn't taken it to the next level.

The worldbuilding was much better. I felt like I had a true sense of the place and community. It is nice that their magic, although not widely acknowledged, is accepted. In many stories people have to make terrible sacrifices to a witch who grants their evil desires. In this story, people push their heartfelt requests through her mail slot. As for payment, Carlie herself says, “I accept kind acts done for strangers, a promise kept, or a small thing of value from the person who is seeking my craft. These things require some thought, and a degree of existential justification; for that reason, I don’t get many casual requests.”

I have to admit, I thought the main character wasn’t very smart to off into the woods after monsters, in the opening scenes, without anyone to watch her back. That’s a good way to get yourself killed. But, it contrasted nicely with her having companions for the main part of the story.

NARRATION: Her male voices were acceptable / Wulfric’s voice was especially slow / a few odd pronunciations / Listened on 1.25 speed (my usual)

FAVORITE PART(S): Quote - “That much java would have me twitching like a tuning fork held by nervous weasel.” (don’t know why a weasel would hold a tuning fork, but it made me laugh)

I COULD HAVE DONE WITHOUT: mild swearing (& some crudity from Tammy) / Instalove with very little development / love scene between two unmarried characters who have only really spent a few hours together (no details were included, thankfully)

OTHER WARNINGS: One of the main characters previously had an out of wedlock child. / Reading may cause hunger, especially a craving for waffles.

I received this book free in return for an honest review, courtesy of Audiobook Blast.

Wulfric is going to come home, but Carlie is going to have to learn how to make time stand still to do it!

I love the name Carlie. It's one of those names that floats somewhere between cool/beautiful/quirky that really set the mood for what I wanted her to be. Wulfric is a classic Viking name, but of all the characters, my secret favorite is Tammy Cincotti. I think we've all met someone like her, but I laughed out loud writing her lines because after I read them, I said "That's a TAMMY."

Regarding an actress to play Carlie, let me rant for a moment. I don't trust Hollywood. They regularly miscast people in roles that are so far out of their physical description it defies belief. With that in mind, Carlie is a petite, confident woman with gray eyes, black hair, and Doc Martens. There aren't many actresses matching that description, but I invite your readers to send their suggestions to me because I'd love to know who THEY see filling her boots.

I'd also like to say that yes, I love the moon, and not simply because it's waffle-shaped for three days a month. I think that there's a special kind of light from the silver moon, and it's kept me looking up my entire life. I rather like knowing that no matter what, the moon will come back, even if I have to wait for her.

I love physical books, and I think that their demise has been prematurely reported. However! Since crashing into middle age, I've started running, and audiobooks are a perfect means of distracting myself with a rich story while ignoring the fact that with each passing mile, I sound like I'm closer to death.

For my first book, I wrote the story that met two criteria: I wanted to read it, and it was in my mind, simply waiting to be shaped. That's it. It's not a struggle to write a novel; rather the key is writing the best possible novel at any given moment. I have dozens of complete ideas, but I can't convince my body to give up sleep. Or eating. Or pie.

Halfway Bitten [which is actually the next book] was, from first word to last, three and half months. But again, pie and sleep slowed me down.

The easiest part of writing a novel is being excited about seeing the entire arc in my mind. The hardest part is convincing my dogs not to drool on me while I type. They seem to regard my open laptop as an invitation to 1) Howl 2) Howl and chase each other and 3) Commence wrestling at my feet.